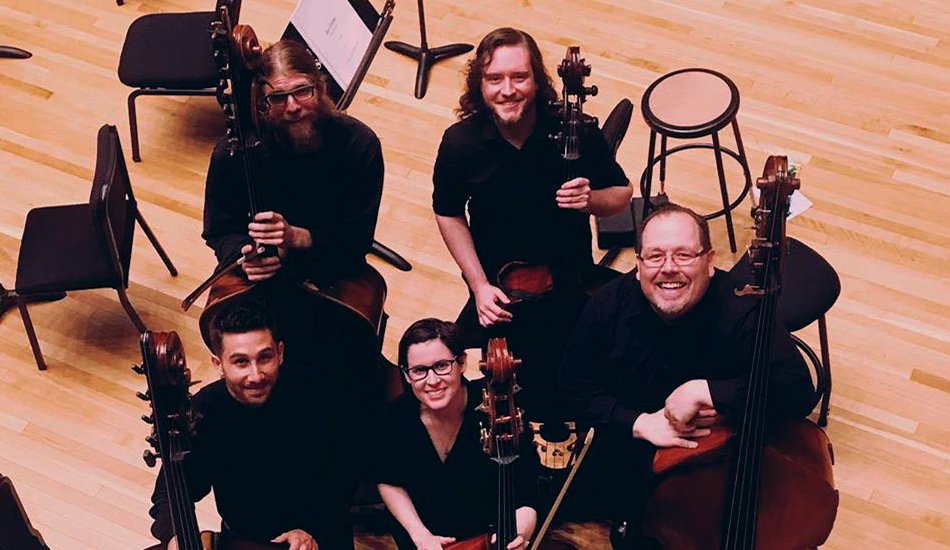 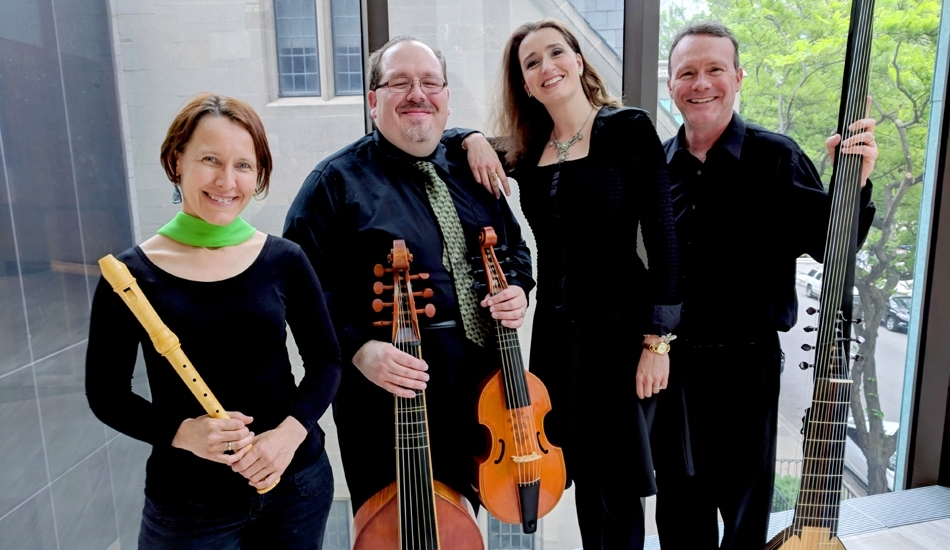 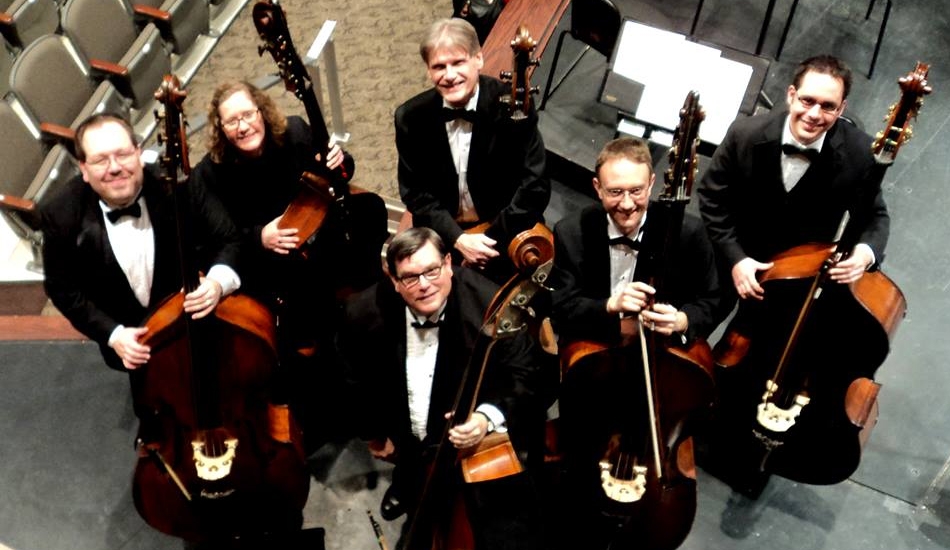 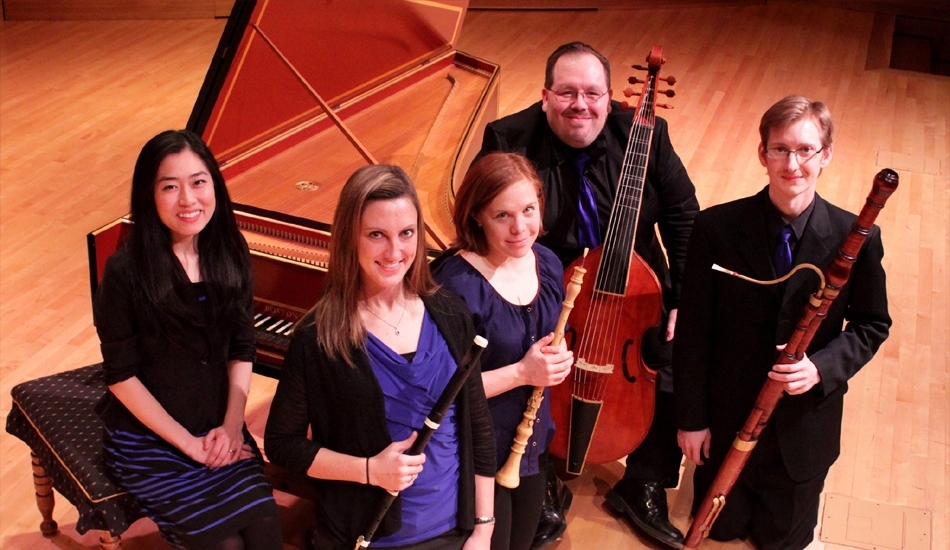 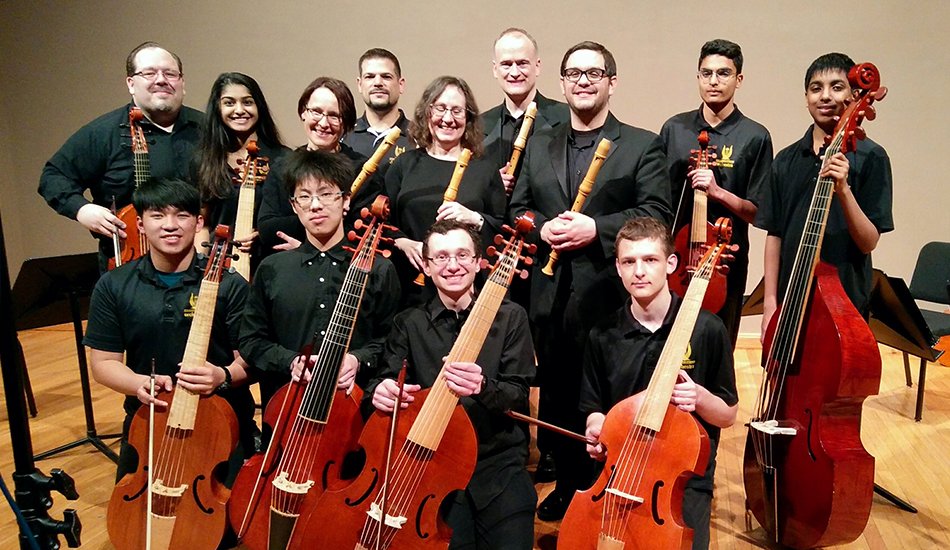 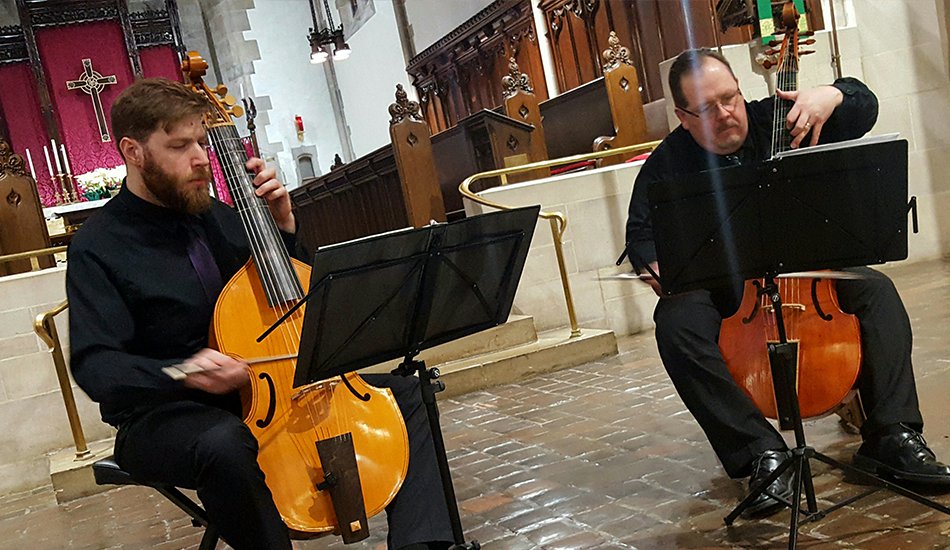 “…perhaps the hardest-working guy in early music” – VdGSA News, Fall 2020
“I find Serna’s entrepreneurship progressive, impressive, and inspiring. His output embodies the kind of out-of-the-box thinking that continues to keep the early music community alive and energetic in the digital age.” – VdGSA News, Fall 2020
“Smooth & polished…”  – Centerstage.net
“A viola da gamba is added to the [Schola Antiqua vocalists] in the three motets included to great effect. It is neither too intrusive in the mix of voices nor too far in the background as to be ineffectual…the blend of the voices combined with the subtle presence of the viola da gamba makes this a wonderful conclusion to an enjoyable listening experience.” – Notes, June 2011
“…with the addition of gamba, are some of the most well-balanced and lovely moments on the recording…” – Early Music America Magazine, Fall 2011 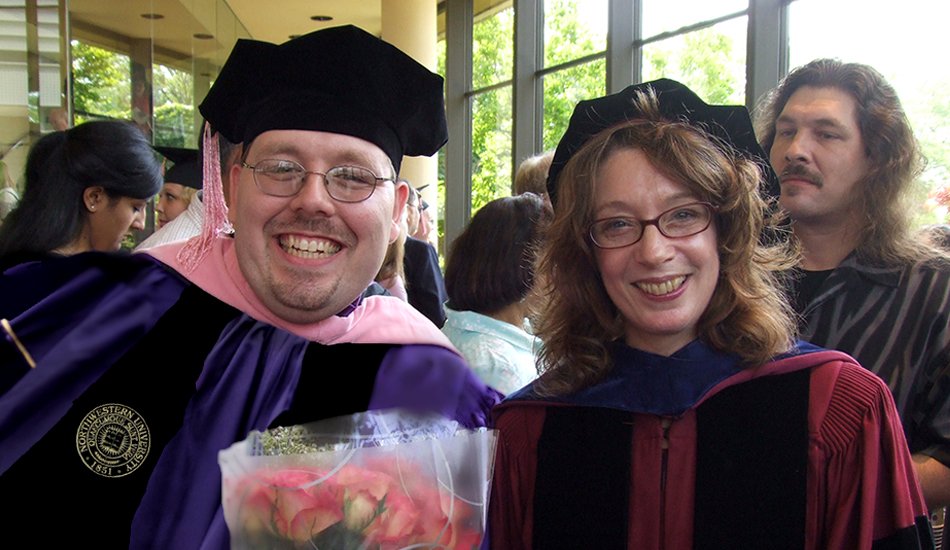 In addition to performing contemporary, solo, orchestral, and chamber repertoires on double bass, Dr. Phillip Serna has emerged among the nation’s leading advocates of Early Music performed on viols – violas da gamba. He earned his Bachelor of Music at the San Francisco Conservatory of Music in 1998, later completing his Master of Music & Doctor of Music degrees at Northwestern University’s Bienen School of Music in 2001 and 2007, respectively. His dissertation, ‘Original Crossover? Popular Ballad-Tunes as Art-Music for Viols in Seventeenth-Century England’, focused on solo and ensemble settings of English ballad-tunes for viola da gamba as well as lyra viol transcriptions for double bass. 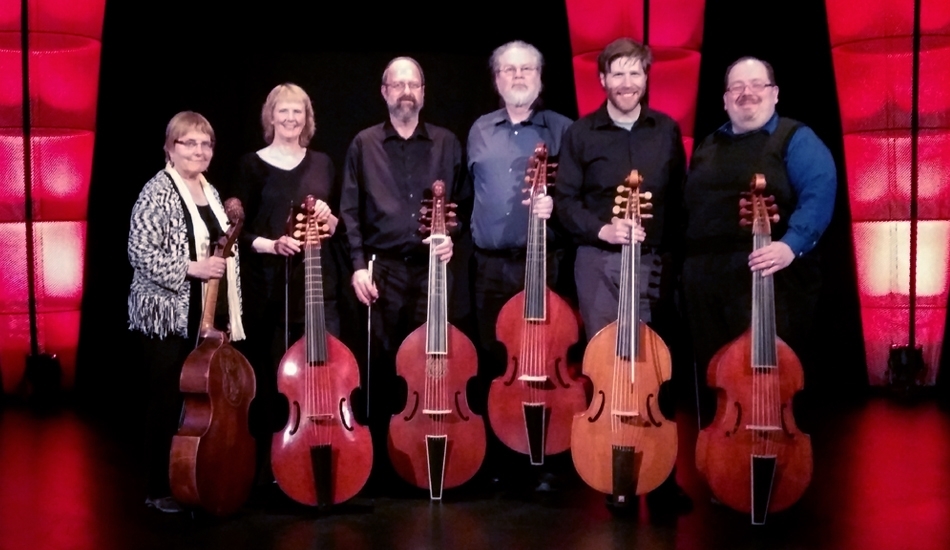 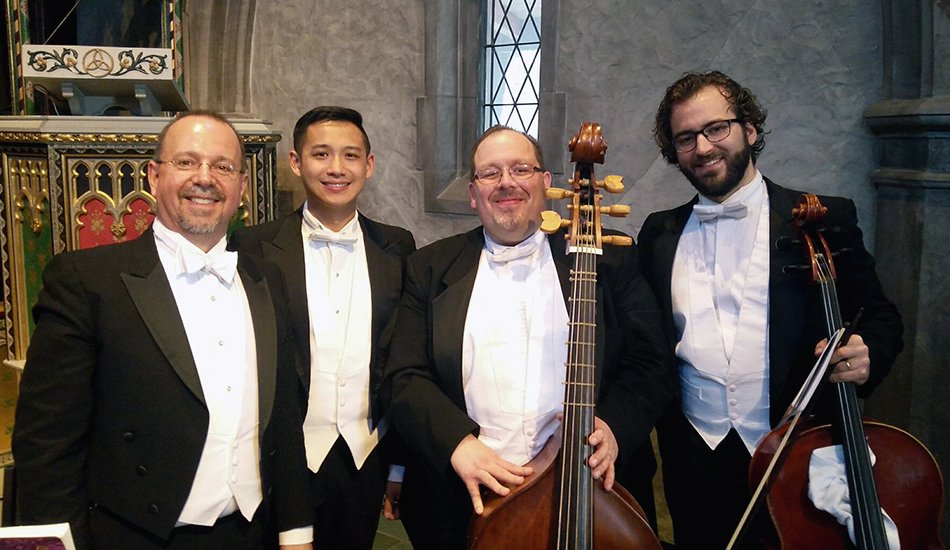 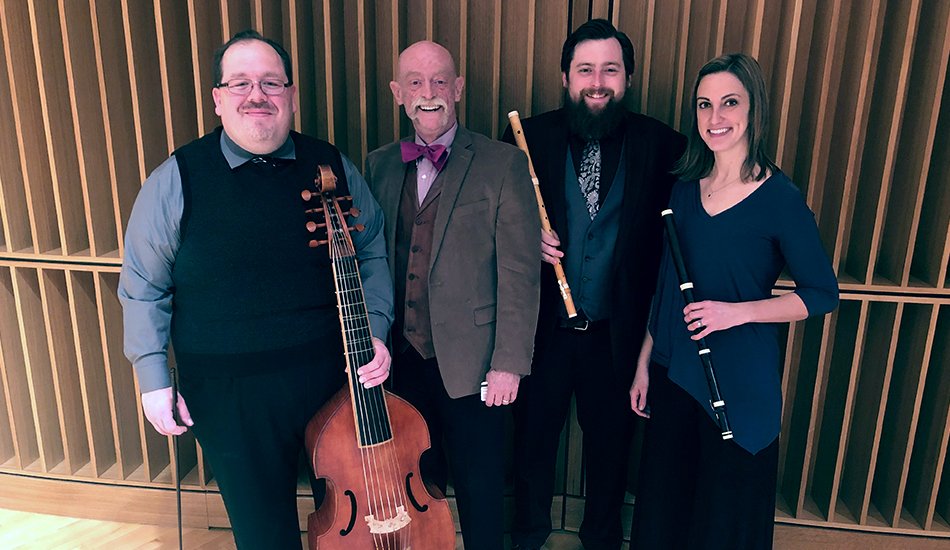 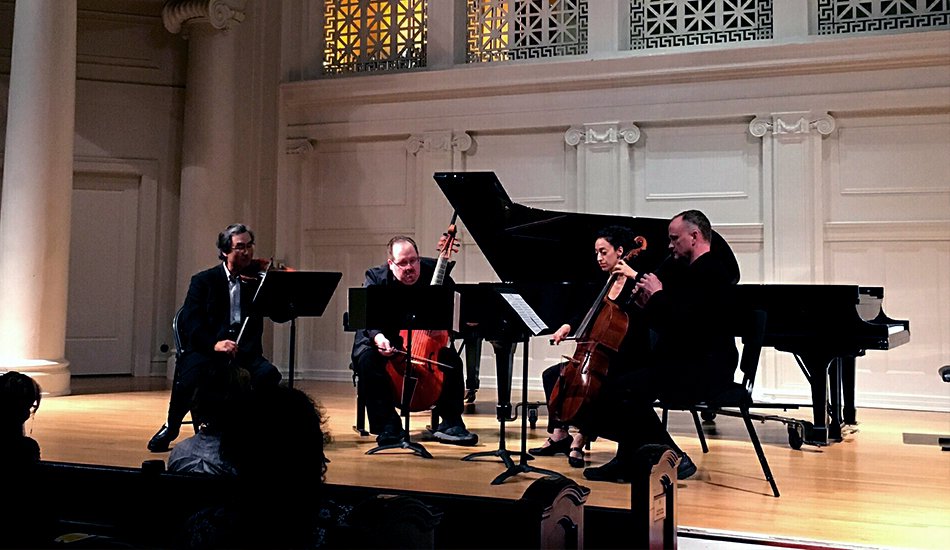 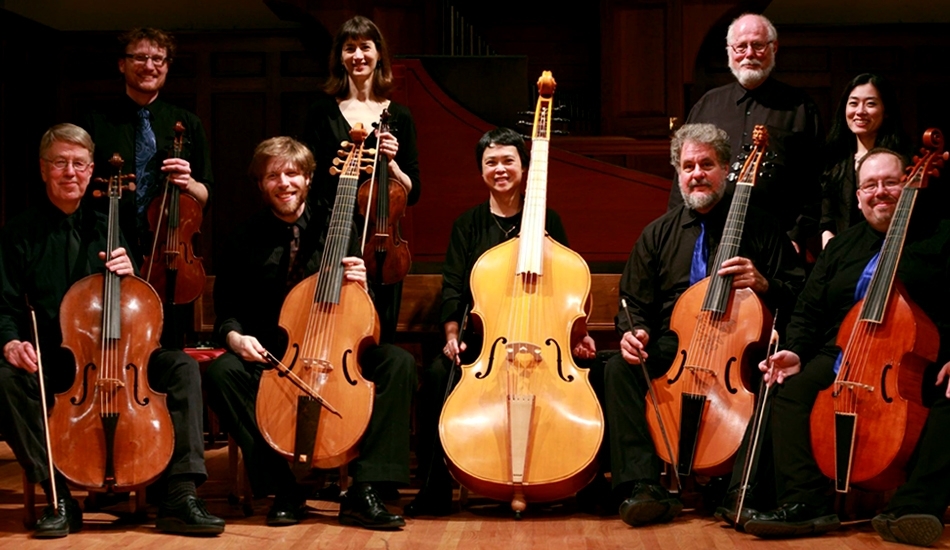 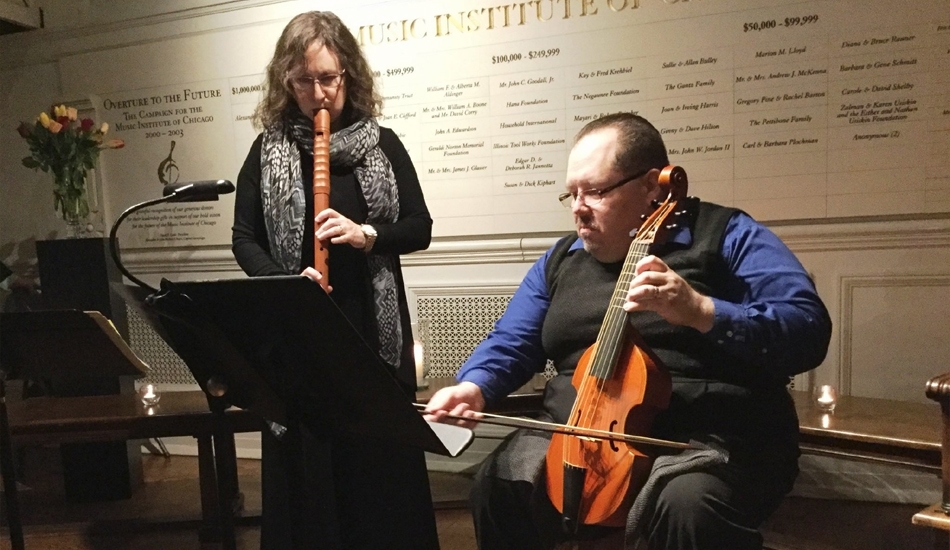 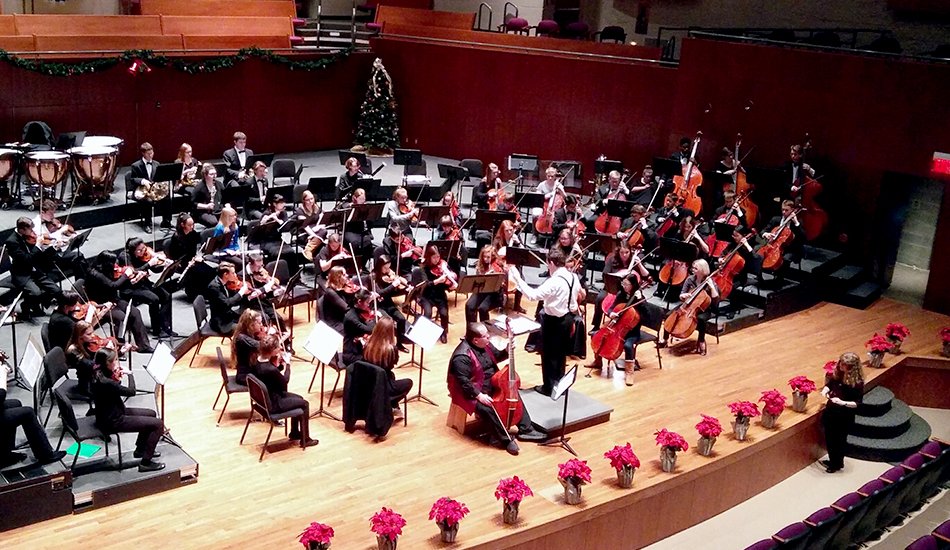 From the U.S. premieres of Dolmetsch’s Concertino in 2012 and Abel’s Concerto Violo de Gambo in 2018, to the 1st complete performances of Telemann’s 1735 Fantasias, Dr. Serna repeatedly distinguishes himself as a champion of literature new and old for viola da gamba. In performance, he has appeared on many prestigious concert series including the Academy of Early Music, Byron Colby Barn’s Early Music at the Barn Series, Gotham Early Music Scene’s Midtown Concerts, the Mendelssohn Performing Arts Center’s Mainstage Series, Morton Arboretum’s Winter Chamber Series, SoHIP Boston: the Society for 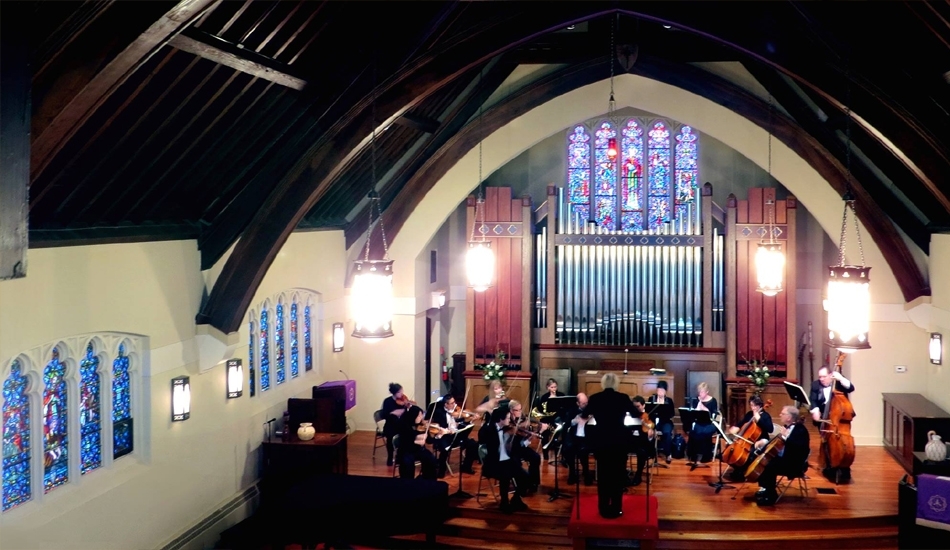 Historically Informed Performance and many others. He has appeared on WFMT Chicago, Wisconsin Public Radio, Milwaukee Public Radio, and can be heard on film and video game scores by Neil Acree, Andrew M. Edwards, Scott Glasgow, and Kubilay Üner alongside CD releases from Clarion, Cedille, and Varèse Sarabande Records as well as his upcoming solo album Shattered Glass – New Music for Viola da Gamba by Women Composers, available in March 2023.

In 2007, Dr. Serna’s article ‘Early Strings in the Classroom/ Introducing Students to Renaissance and Baroque String Repertoire on Period Instruments’ on classroom outreach advocacy was published in the American String Teachers Association String Teacher’s Cookbook – Creative Recipes for a Successful Program. He serves as the Online Editor for Early Music for the International Society of Bassists , on the editorial board of the Online Journal of Bass Research, and has contributed articles to the Bass World – the Official Magazine of the International Society of Bassists, the American String Teacher, to the Contrabass Conversations Podcast, and the online bass resource DoubleBassblog.org. In Early Music publications, Dr. Serna has served as outreach editor for the VdGSA News – the Newsletter of the of the Viola da Gamba Society of America, and has contributed to Early Music America ‘s magazine. 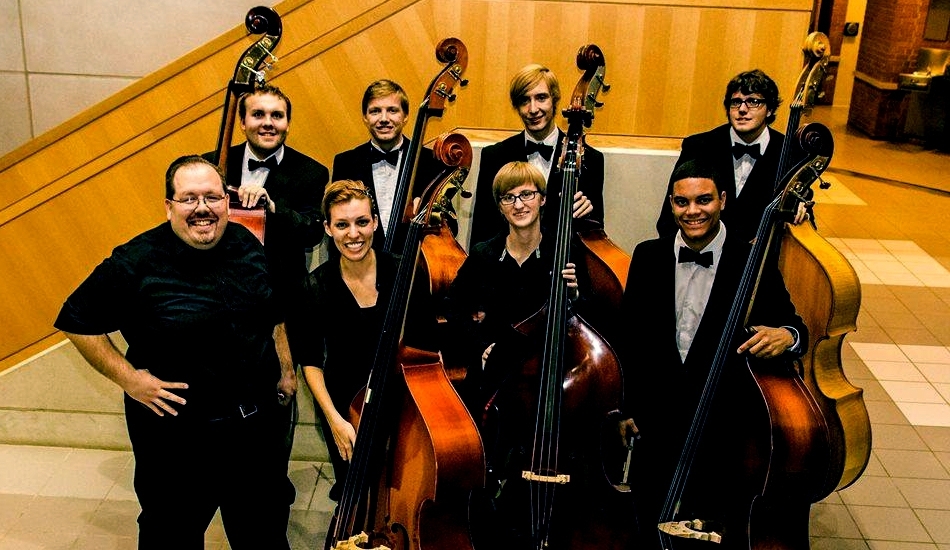 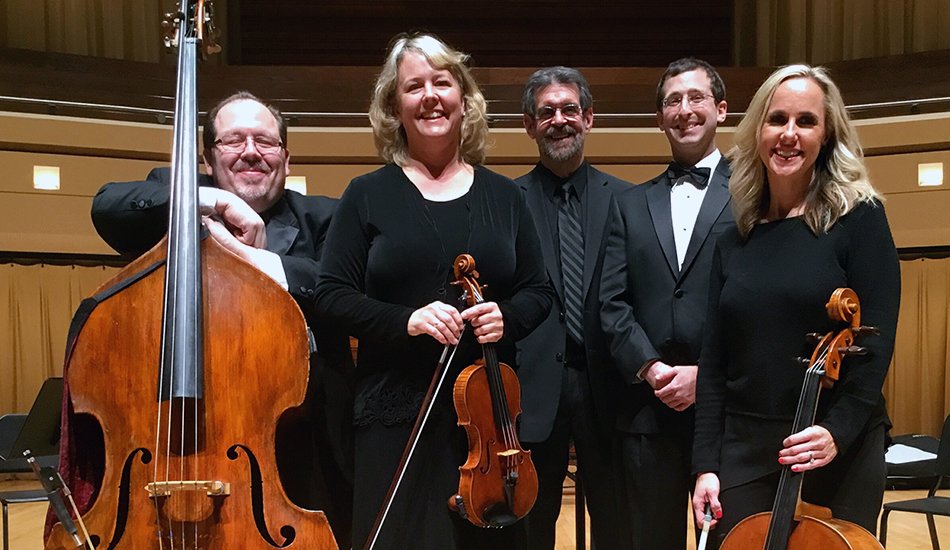 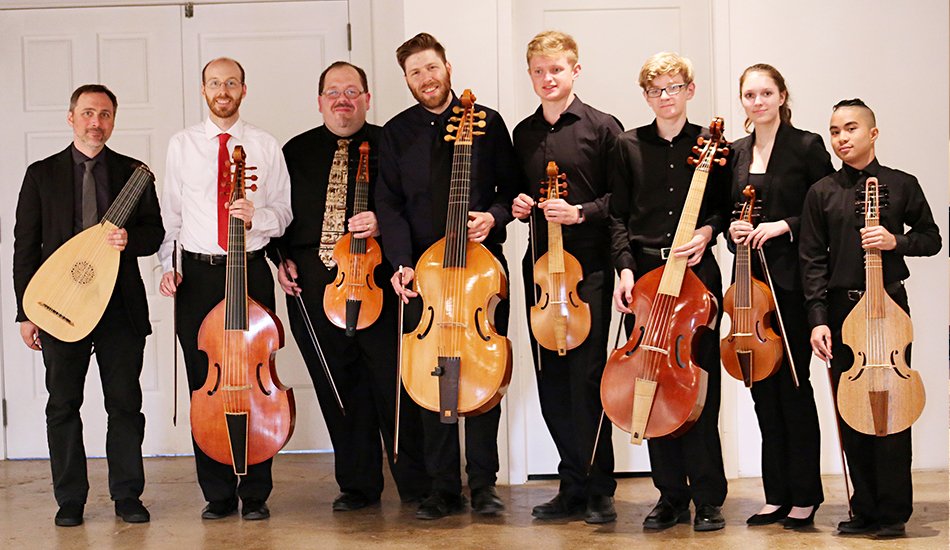 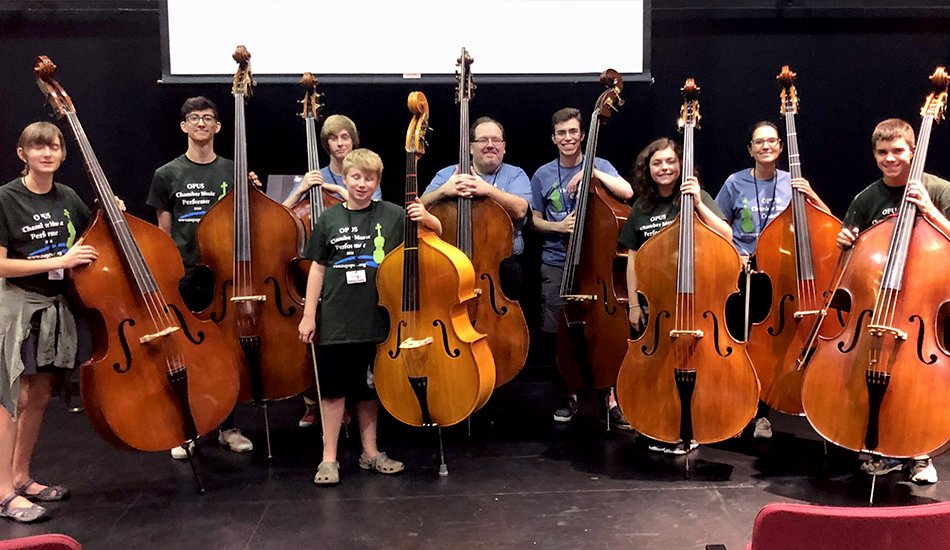 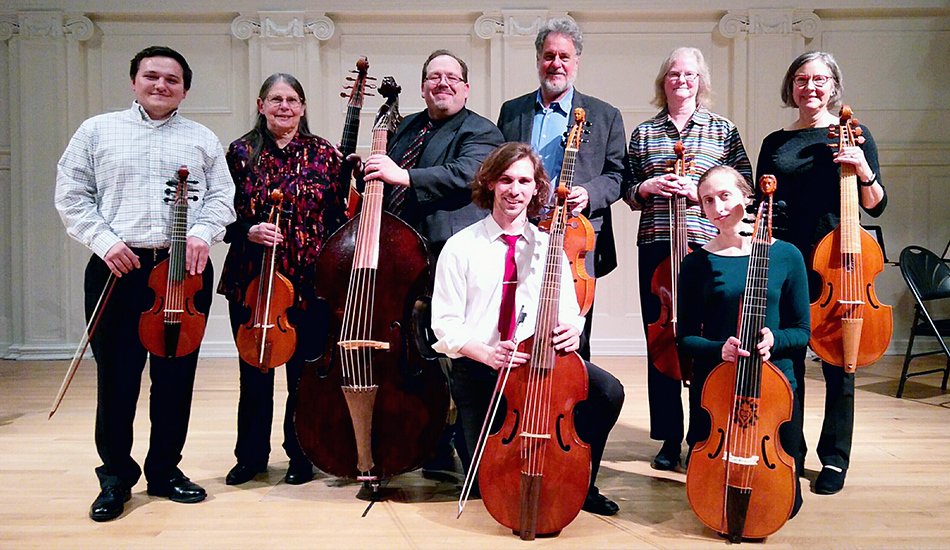 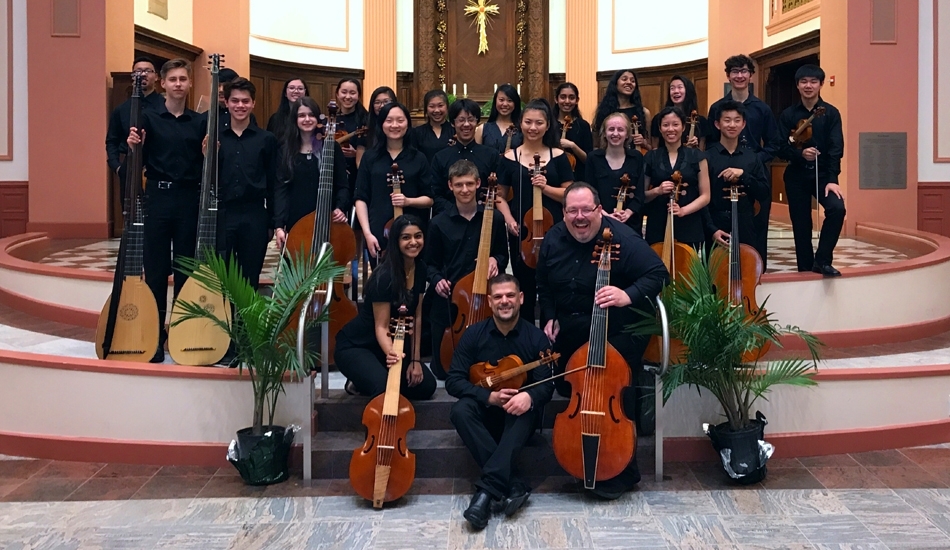 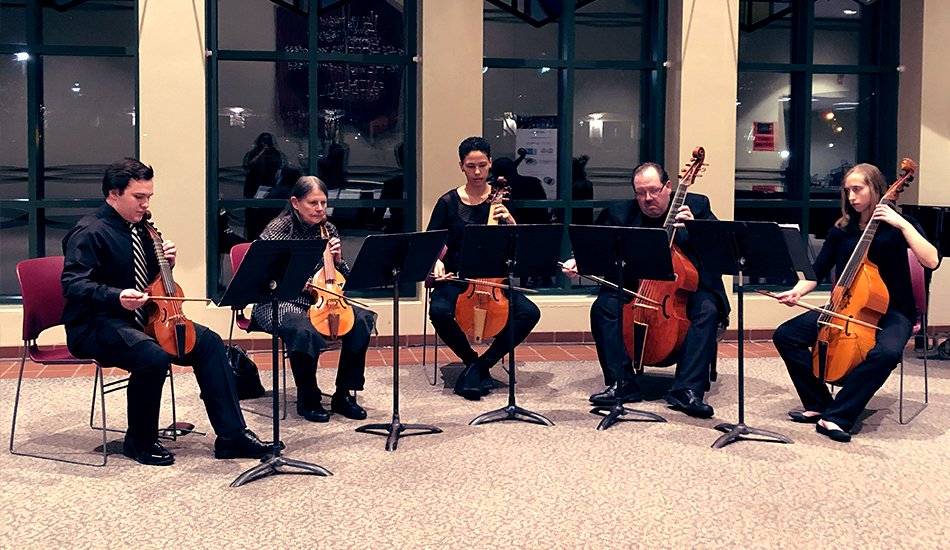 Dr. Serna is in demand as an adjudicator and clinician in the Midwest and has serving on the faculties at the Chicago Bass Festival, Ball State Bass Day, Butler Midwest Bass Day, OPUS Chamber Music Camp, and the Whitewater Winter Bassfest. Dr. Serna presented ‘Making Your Baroque Solos More H.I.P.’ in conjunction with Jessica Powell Eig’s ‘The Cuckoo’s Egg …or Just Plain Cuckoo? Transcriptions of Early Music for Double Basses’ at the Historically Informed Performance Summit at the 2013 International Society of Bassists Convention at the Eastman School of Music in Rochester, NY. The two reunited  presenting  ‘Take a Walk on the Viol-Side – An Introduction to Period Bass’ for the Young Bassists program and performing ‘The Great Dooble Bass – Music for Violone & Viols’ at the 2019  International Society of Bassists Convention  at Indiana University’s Jacobs School of Music in Bloomington, Indiana. 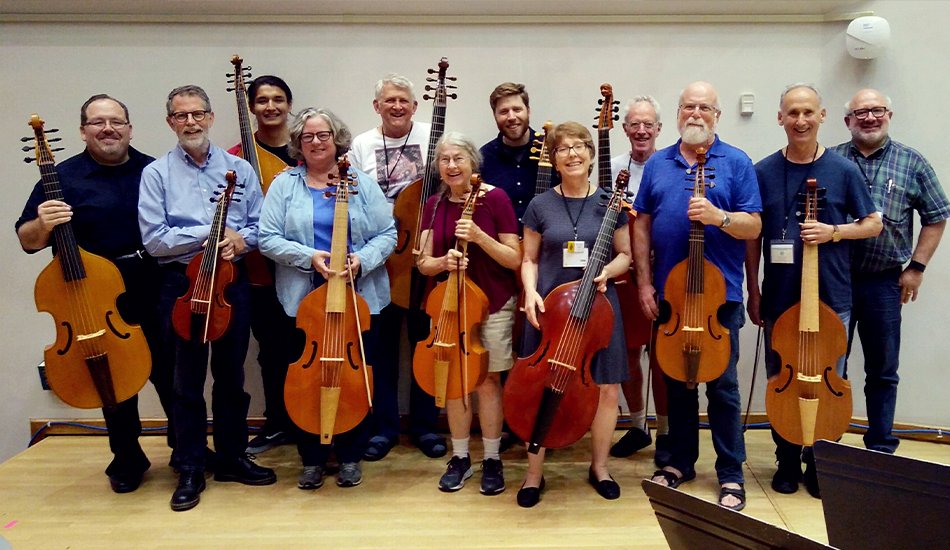 On violas da gamba, Dr. Serna has served on the faculties of the Madison Early Music Festival, Music on the Mountain Winter Workshop, the Whitewater Early Music Festival and is music director of Viols in Our Schools, an education initiative that earned him Early Music America’s 2010 Laurette Goldberg Award for Early Music Outreach. Dr. Serna is a member of the International Society of Bassists (ISB),  Early Music America (EMA), New Music Chicago (NMC) and served as president of the Viola da Gamba Society Third Coast (VdGS 3rd Coast), the Chicago-area chapter of the Viola da Gamba Society of America (VdGSA). Phillip currently serves as acting-principal double bass & personnel manager of the Illinois Philharmonic Orchestra and lives in Plainfield, IL with his best friend and wife, Magdalena, along with their daughter Natalia and their dog, Ellie. 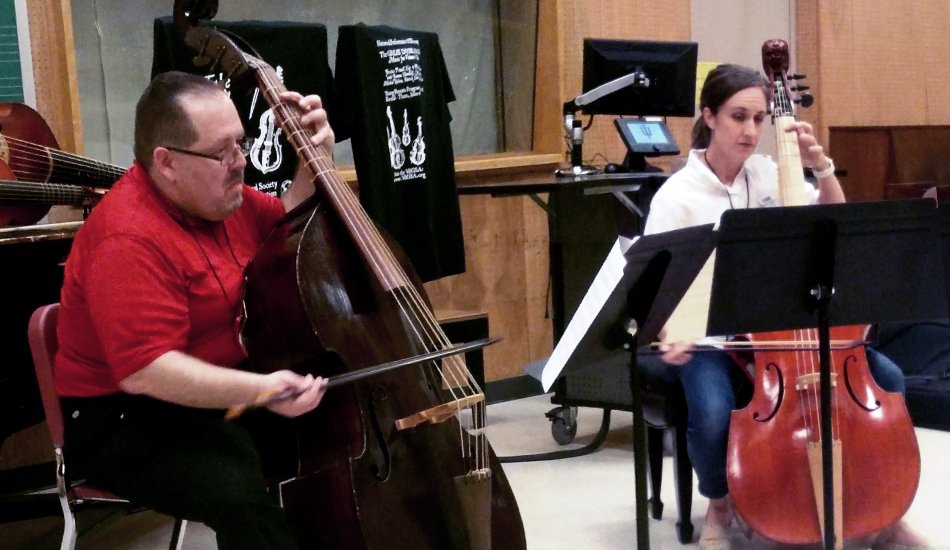 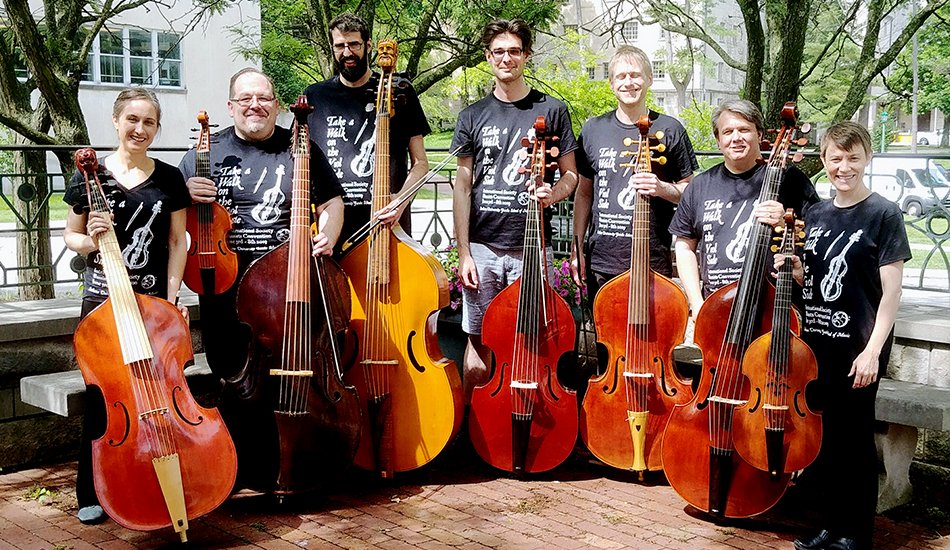 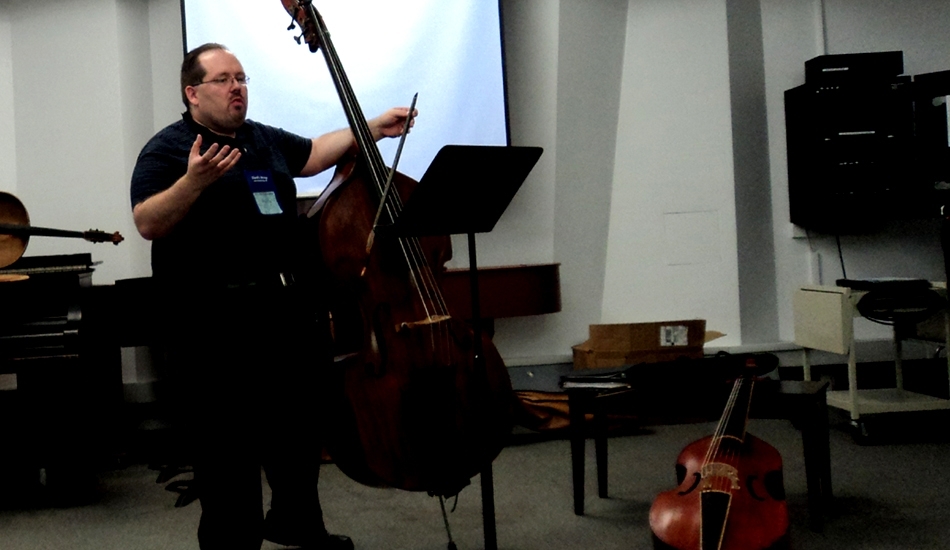 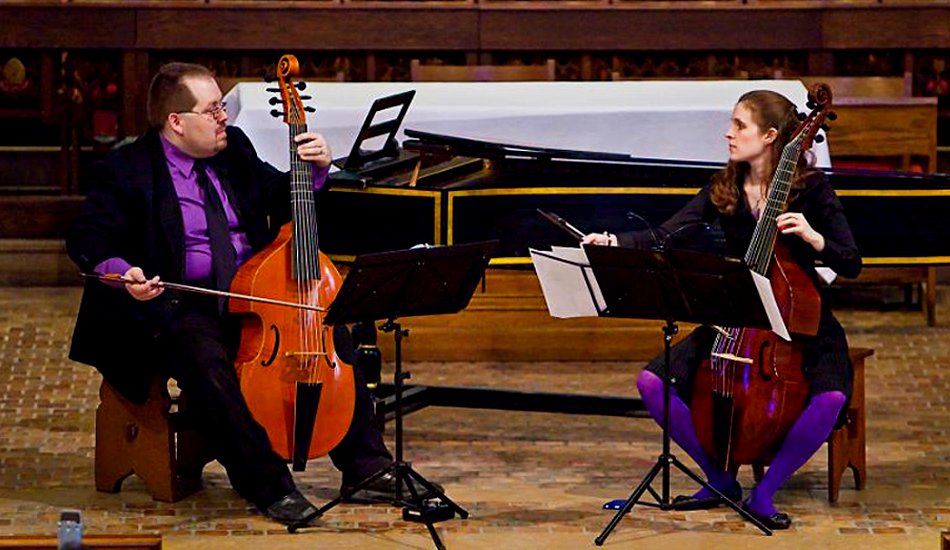 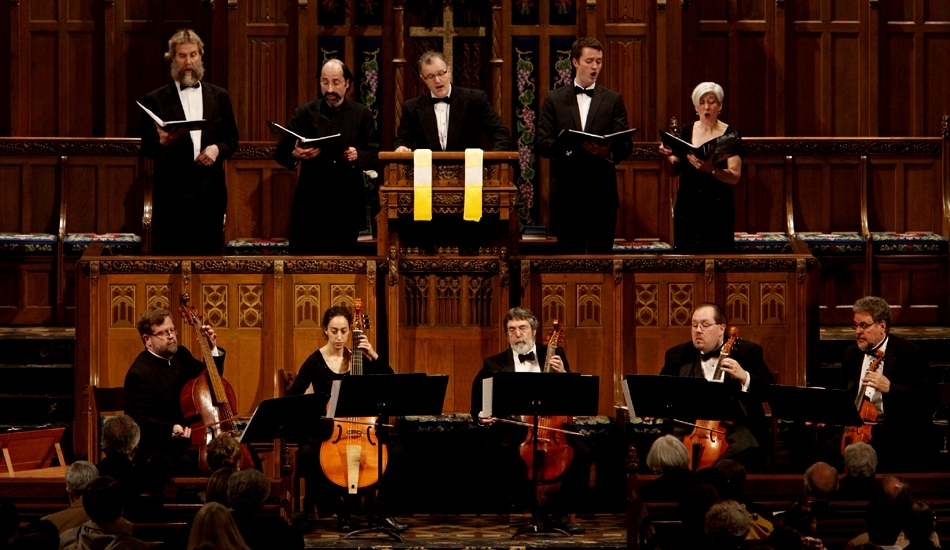 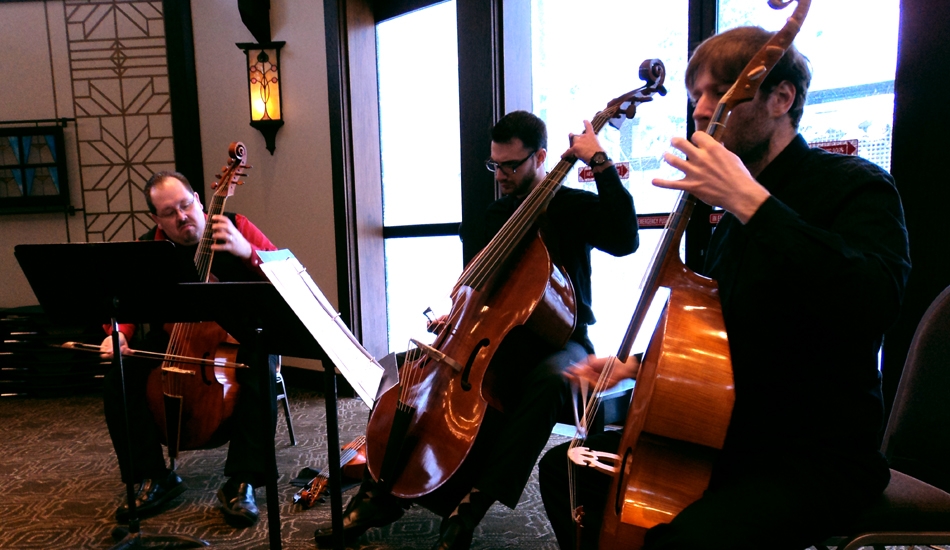