This article was originally published on the Double Bass Blog on October 9th, 2007 by Phillip W. Serna as part of the Early Bass Performance – Early Music Interview Series. For other installments in this series, as well as many great resources for the amateur, student and professional double bassist, please visit the Double Bass Blog and the Contrabass Conversations Podcast. 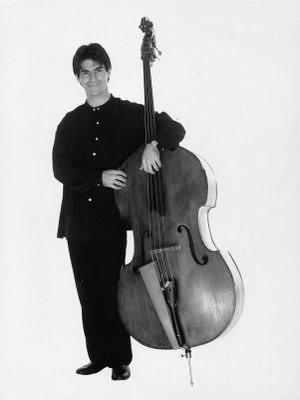 Contrabass Conversations and the Double Bass Blog are beginning a new series on early bass performers. It will highlight many different perspectives on early bass/ violone performance. Our first guest is Pennsylvania University School of Music double bass professor Robert Nairn, president-elect of the International Society of Bassists for the 2009 convention. We hope that you will enjoy these interviews and glean a good deal of information from our esteemed guests.

Robert Nairn teaches double bass and directs the Baroque Ensemble at the Penn State University School of Music. A native of Australia, he received his Bachelor of music with distinction from the Canberra School of Music and a post-graduate diploma from the Berlin Musikhochschule by courtesy of a two-year DAAD German Government Scholarship.His teachers have included Klaus Stoll, Tom Martin, and Max McBride. He has performed with the Pittsburgh Symphony Orchestra, the London Philharmonic, the English Chamber Orchestra, the Bavarian Radio Symphony Orchestra, the London Sinfonietta and the Melbourne Symphony Orchestra. He has acted as guest Principle Bassist with the Halle Orchestra, the London Mozart players, the Sydney Symphony Orchestra and held the position of Principle bass with the Australian Chamber orchestra and the Adelaide Symphony Orchestra. In the Early Music world he has been principal bassist with Boston’s Handel & Haydn Society since 2003, and has performed with Concerto Caledonia, Orchestre Revolutionnaire et Romantique the Aulos Ensemble, the Washington Bach Consort, the English Baroque Soloists, the Orchestra of the Age of Enlightenment and for eight years regularly in London as a member of ‘Florilegium’.

He has premiered of over thirty newly commissioned works for solo double bass and chamber groups, working both alone and with such groups as the London Sinfonietta, Gruppe Neue Musik Berlin, Australysis, the Music Theatre of Wales, and the Sydney Alpha Ensemble. Current commissions include a concerto by Michael Berkeley and works by Elean-Kats Chernin, Peter Askim, John Carbon, Peter Hamlin, Ben Wolfe, Teppo Hauto-aho and Roger Dean.

As a soloist he has performed several concerti with the Australian Chamber and Adelaide symphony orchestras (including Bottesini’s Passiona Amoroso with Gary Karr) and has given many recitals in Europe, the U.S. and Australia. His first solo CD is due for release shortly.

Rob is president-elect of the International Society of Bassists and will be hosting in June 2009 the ISB Convention at Penn State.

I have been seriously interested in historical performance for about 15 years. It began while I was principal bassist of the Australian Chamber Orchestra; we toured with a number of people like Anner Bylsma, Pieter Wispleyway, Bob Levin, Ab Koster and Ton Koopman and they turned me onto a different and amazingly energetic sound aesthetic. The early music ‘scene’ in Australia in those days was in it’s infancy and I wanted to get back to Europe to get involved and learn. A few years later we had the opportunity to move to London where I had some lessons with Chi Chi Nwanoku and joined the group Florilegium (who I’d also met and played with in Oz)- playing beside their cellist Danny Yeadon was the fastest learning experience I have ever had.

My main instrument for historical performance then and now is a French instrument from around 1800. It’s quite small but speaks very quickly and is quite powerful with gut strings. It’s great for a range of repertoire.

The double bass is all I can say that I have really formally studied, apart from from sojourns with guitar and flute and several years on the road as an electric bass player! I’m rather self taught on both the G-baroque and classical Viennese Violone.

Anner Bylsma (I had the great fortune to have some lessons with him which I will never forget – Bach and Beethoven sonatas) – so many of the things he said keep coming back to me. Also working with Peiter Wispelway, Franz Bruggen, Roger Norrington, Rachel Podger, Cat Mackintosh, Kati Debretzeni, Dan Stepner, Emma Kirkby, Stanley Ritchie, and Malcom Bilsen.

I did my undergraduate study at the Canberra School of Music with Max McBride and graduate study with Klaus Stoll in Berlin. Both of these great teachers were very attuned to historical performance.

What teachers and schools would you recommend students look at for college focusing on early music?

There are now a number of great places to study historical bass/violone; This is a bit of a list (in no particular order):

If you studied early music at university, who were some of the faculty who had a lasting affect on you?

Sadly my early music studies were mostly done ‘on the job’. Over the past 10 years I have caught up an a lot of reading that was missing.

My summer festival experiences were the Schleswig-Holstein Festival with Leonard Bernstein in Germany which, while not in any way an early music festival, was a huge influence on my life (not least because of meeting my wife there!).

Favorite works? I love to perform Bruckner, Wagner and Mahler every bit as much as the Brandenburg Concerti. Especially memorable concerts: Playing “Die Walkure” on period instruments with the Orchestra of the Age of Enlightenment with Simon Rattle at the Proms a few years back, Haydns “The Seasons’ with the Handel and Haydn Society with Roger Norrington at this year’s Proms, playing the Haydn symphonies 6,7 and 8 in Esterhazy last year, recording Messiaen’s “Saint Francois d’Assise” with the Halle and Kent Negano for Deutsche Grammaphone at the Salzburg festival, touring the Brandenburgs in Europe with Florilegum in 2000. I currently have a duo with a cellist, Guy Fishman and we perform repertoire from the early C19th – built upon the chamber works that Dragonetti and Robert Lindley played.

The language in which these works were written, born of the spoken articulation of the native languages in which the composers worked.

What advice would you give an aspiring double bassist who might want to immerse themselves in early music?

Get an authentic copy of an original bow – I think this is more important than the instrument or even gut strings. Then do a lot of listening to appreciate the sound aesthetic, then find an ensemble to work with.

No specific research – I’m really a performer and poor scholar but I do dig around to find manuscripts and will be preparing some editions in the next few years. I am also (slowly) compiling an on-line resource for Dragonetti manuscripts – we have copies at Penn State of all the manuscripts from the British Library .

What kind of basses and violone do you play on?

I own a baroque instrument (a copy of a DaSalo bas made by StefanKrattenmacher) and an early classical french instrument. I have a new Vienesse Violone on order from Oskar Kapelmeyer. I do not currently own a baroque G-Violone but hope to have a new one shortly.
Disclaimer: while I’d love to own several original early baroque and classical basses and have had the great fortune to play (especially recently a recital in London) on some basses owned by friends, especially in London (Peter McCarthy) with several small kids the economics are against me!

How long have you owned these instruments?

The French bass for 25 years, the Kratenmacher was made for me about 4 years ago.

Do you play German bow, French bow? When you play violone, do you use a violone bow (large viola da gamba bow)?

I teach both over and underhand bows but use underhand pretty exclusively now when I perform. I’m lucky to have a quite large collection of historical bows, both original and copies from the mid C16th to early C20th and have learnt a lot by spending many hours finding out what they can do – you can learn a great deal from a bow.

What is the pedigree of your stick?

The earliest bass bow that I have seen with a probably reliable stamp is a Dodd, so it’s difficult to establish with much certainty what a bows provenience could be. I have a number of original early bows in maple, ash, rosewood and snakewood and copies of various bows made for me by Roger Doe, Scott Wallace and Rudolf Hopfner. These are copies of bows in the cité de la musique museum, the Kunsthistorisches Museum Vienna and the Leidolff Museum in Graz.

What kind of strings do you use? What other brands have you used in the past?

I have been using string made by Damien Dugolecki, and Mimmo Peruffo (he makes an amazing plain gut low D string!) for years and more recently experimenting with Kirschner.

What kind of rosin do you use?

For gut strings I use Gaston Brohan’s Oak rosin.